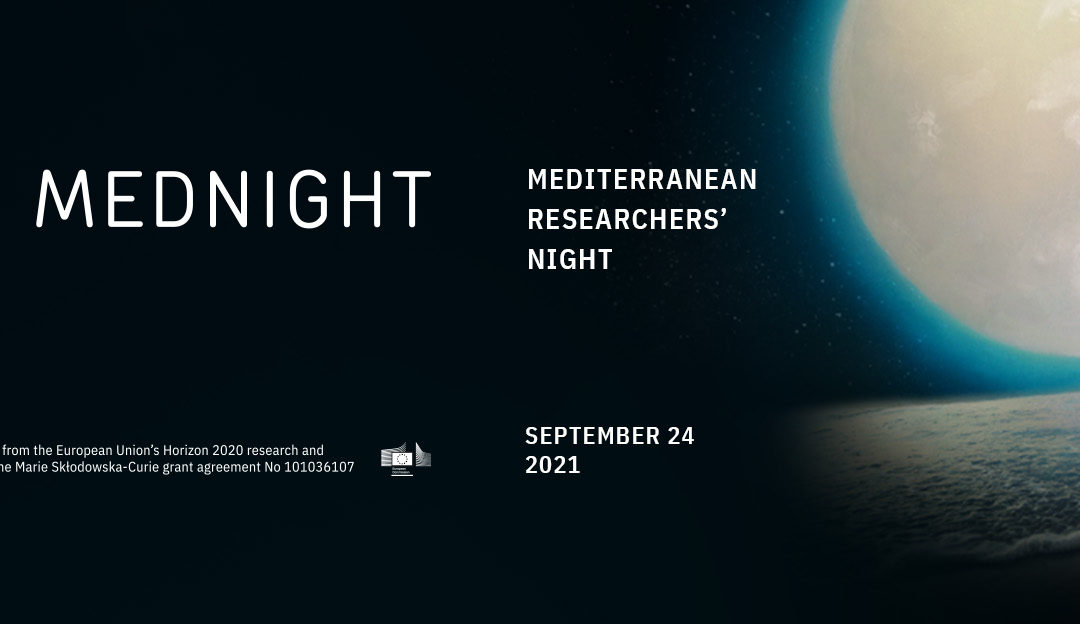 The meeting for the international launch of the MEDNIGHT project will take place on June 3 and 4 on the Greek island of Lemnos. It is coordinated by SciCo Greece and the Department of Food and Nutrition Sciences of the University of the Aegean, with the support of the Municipality of Lemnos.

Objective of the activities: to promote Mediterranean science

All of the activities presented have a common objective: to promote and showcase Mediterranean science, especially emphasizing the work carried out by female researchers.

MEDNIGHT 2021 has identified eight subject areas that cover the most challenging fields for the Mediterranean basin and in which scientists have an indispensable role: Geology and biodiversity, Sea and pollution, Climate and clean energies, Diet and nutrition, Life and health, History and heritage, Pioneering female scientists and the Future.

Mediterranean science activities for all audiences

In Lemnos, SciCo Greece will present its Mind the Lab: Guerrilla Science activity—an innovative dissemination approach with the purpose of reaching an audience that is typically distanced from the scientific realm. SciCo will organize the Mind the Lab activities on the island of Lemnos during the launch event. It will be intended for citizens, tourists and other passers-by in central places through scientific experiments. The “science activities” will also take place throughout the summer on beaches, beach bars, train stations, ports and parks.

The Seneca Foundation – Science and Technology Agency for the Region of Murcia, will present its exhibit of over 25 panels about the scientific career of current and practicing researchers in countries of the Mediterranean basin. The countries included will be: Albania, Algeria, Bosnia, Cyprus, Croatia, Egypt, Slovenia, Spain, France, Greece, Israel, Italy, Jordan, Lebanon, Libya, Malta, Morocco, Montenegro, Serbia, Syria, Tunisia and Turkey.

The Universidad Politécnica de Cartagena will detail its EU CORNERS proposal. It is an in-person and online activity that will present the European Union’s policy lines regarding science and education. The goal is to inform the public of the practical use of European funds and the advantages of forming a team with Europe. EU CORNERS will also hold recreational activities intended for the public. In addition, UPCT will organize a large event to disseminate science in September, coinciding with the Festival of the Romans and Carthaginians.

The FISABIO Foundation will launch the Green Challenge, a video contest whose objective is to put scientists in contact with young students. Mediterranean researchers will propose four challenges to high school, university and professional training students. Each challenge will be announced through a video on social media and the MedNight website and will be related to one of the areas of the Green Deal: Geology and biodiversity; Sea and pollution; Climate and clean energies, Life and health. The students who want to participate in the activity individually or as a group must respond to one of the challenges through a video that lasts a maximum of 2 minutes and post it on Instagram. There will be one winning video for each one of the topics.

MUDIC, the Didactic and Interactive Museum of Science of La Vega Baja del Segura in the Valencian Community, will present its Tales of the MEDNIGHT activity. It is a contest for researchers to write tales and stories related to Mediterranean science. During MEDNIGHT, the tales will be read to children as well as refugees in hospitals, homes for the elderly and immigration centers. In addition, various activities will be organized to promote scientific vocations in Orihuela and Elche.

All of these activities begin in June and bode for a summer in which recreational and participatory science for all will be present in several locations of the Mediterranean Arc.

The MEDNIGHT project will conclude September 24th in a session that will feature over 500 simultaneous activities in various cities throughout the Mediterranean, coinciding with the European Researchers’ Night in 370 other European cities.

It will be the finale that Science deserves. Among other events, the Universidad de Murcia will organize around 50 workshops on the streets of Murcia and its main site of the Campus de la Merced, with the Mediterranean heritage as the protagonist. There will be several exhibits of science, experiments, short meetings with scientists, interactive games, trivia, contests, exhibitions, etc.

The former riverbed of the Turia River in Valencia will become the “MEDNIGHT Crossroads,” where various activities and spectacles open to the public of all ages will converge, coordinated by the partners INCLIVA, FISABIO, the Universitat de València and CSIC.

The Universitat Jaume I will host its main event in the gardens of its campus in Castelló de la Plana, where several workshops and experiments will be held. Among other activities, a treasure hunt and discussions among researchers about their work in various scientific areas will also be organized.

The Universidad de Alicante will offer several conferences, experiments, workshops and online games to primary and secondary education students that will address all areas of knowledge. In addition, for the adult audience, a geological tourism route will be offered that will feature the most attractive points of the city of Alicante to showcase the city’s heritage from a scientific and informative perspective.

Also, on September 24th, the digital television platform MEDNIGHT TV, coordinated by SciCo Cyprus, will rebroadcast the activities and discussions from all the countries and places participating in MEDNIGHT. Over 500 events of Mediterranean science will be shared on the web platform and will form an audiovisual library with contributions from researchers from various countries. All the information on the activities will be regularly updated on the website www.mednight.eu.

The Foundation for the Research of the Hospital Clínico Universitario of Valencia (INCLIVA), a partner of MEDNIGHT, will be in charge of managing the safety of events, which is indispensable when COVID-19 is still present.

MEDNIGHT will be celebrated within the framework of the European Researchers’ Night, a project to disseminate science promoted and financed by the European Commission as part of the Marie Sklodowska-Curie activities (subsidy agreement no. 101036107) of the Horizon 2020 program.

Graphic material for the press here.